…in which we encounter uninhibited young cattle, unenviably grown-up hikers and unexpected families on safari.

Having supported the Mason’s Arms by staying and eating an excellent dinner there, we breakfasted frugally in morning sunshine on a bench outside the Co-Op, where to our slight embarrassment we were cheerily greeted by the pub landlord walking past us as we scoffed our cheap butties. The Co-Op itself would be more than enough resource for a Wayfarer at Gargrave. It does hot bacon, sausage or fish finger rolls as well as hot drinks, pastries and a massive range of convenience food. Gargrave also has a pharmacy and other shops as well as the Dalesman Café of course. It’s connected by regular trains to Leeds and all points north, including Horton in Ribblesdale – blistered Wayfarers think on’t.

Malham is a tourist honeypot but there’s no grocery shopping, the tiny ‘village shop’ looks like something from The League of Gentlemen and seems to keep random hours. Hence an important reason to visit the Co-Op at Gargrave is to stock your pack for the long day over Fountains Fell and Penyghent. Otherwise you’ll have to improvise: the Lister Arms sells flapjacks, The Old Barn sandwiches and cakes. There is (or was) a handy outdoor shop at Malham with spare and repair stuff and a range of entry level clothing and footwear understandably aimed at daywalkers (it was still there in September 2018).

I like the Old Barn Café because I like friendly, family cafes with simple family food. Despite their small size they take cards and their Yorkshire curd tart is great. Twice in 2016 I ate dinner at the Lister Arms and found it excellent if slightly intimidating. Despite appearances they’re friendly and don’t actually mind muddy walkers. (In September 2018 I ate at the less pretentious Buck Inn, the food was great and I now prefer it to the Lister).

Malham campsite, ours is the tiniest tent!

Ignore reviews that claim the campsite at Town Head Farm is unfriendly; we found it quite the opposite and we thought the instructional signs were characterful and helpful. The lady who runs this pretty riverside site is lovely and has an ‘always room for a Wayfarer’ policy so you don’t need to book. It has showers (at a small extra cost, I believe) it’s directly on The Way and gives you a head start in the morning.

Straightforward once out of Gargrave, although in general wayfinding through farmland is often harder than on high tops, needing a surprising amount of concentration and compass work. The Way heads directly out of town opposite the Aire bridge down the road to the right of The Dalesman Cafe. If you want to visit the Co-Op and other shops, just carry on down the High Street. Then turn left into North Street then right past the car park back up to the canal bridge, there are PW fingerposts. From Hanlith we took Wainwright’s recommended riverside route rather than the higher official Pennine Way; having now done both I agree with Wainwright.

A walk with a companion is a very different experience, especially one with the person you would choose conversation with over any other activity. It becomes dominantly an interaction with the companion rather than with the trail and its landscape. The journalist of the journey has to decide how to reframe the tale of the trail, whether to project its altered image through a refocused lens of portable domesticity. Accounts of accompanied travel often catalogue the allegedly humorous foibles of companions but I’m blessed with a pretty omnicompetent partner, so I can’t adopt that facile strategy. Walking in company introduces debates and compromises, even arguments. It introduces frustrations, as your capabilities and priorities inevitably differ. It reintroduces a humour that you’re shocked to realise how much you’d missed, walking alone. Much of that is lost in translation and the account better for its loss, I think.

You can fill your journal with philosophical pontifications when you’re simply enjoying an easy country walk through green fields along a pretty river, with some frisky cows providing the only drama. At the footbridge just after Airton we met a man about our age claiming to be well through his fifth Pennine Way; his third north to south, he said, which he preferred. This sowed a terrible seed of competitiveness in my middle-aged mind, especially as he seemed remarkably unencumbered. However further enquiries teased out an initially unadmitted amount of vehicular and wifely support. He was in fact a section hiker. Well, really.

Listening to his tales were a couple in identical his’n’hers rainwear and with identical his’n’hers pack covers.  They sipped ostentatiously from their identical his’n’hers hydration systems (the fiddly and unhygienic bladders of Satan in my opinion) and toyed with their his’n’hers astronaut pouches, which contained all-weather GPS’s, all-weather cameras and goodness knows what all-weather else. I considered showing off my Lidl juice bottle and my budget smartphone with its cracked screen but they were busy explaining their paid-for and printed-out daily schedules with distances to the metre, booked luxury accommodations and programmed waypoints. Apart from spurious gadgets, they too were surprisingly unencumbered. They were paying for baggage transfer. Well, really. Let the record show that only dudes and DofE kids have pack covers. Wayfarers keep their dirty socks, noodles and Compeed dry in a supermarket carrier bag. 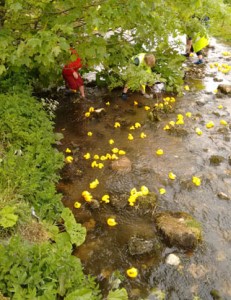 A few of the ducks…

We approached Malham through a huge temporary car park and the village was heaving with kids. Unknown to us, it was the day of the ‘Malham Safari’, a marvellously creative poetry- and wildlife-themed activity day for families. We arrived just in time for the duck race, then pottered about among amazing papier-maché animals, ate chip butties and ice creams, pitched our tent in pole position by the beck, pottered a bit more, ate a splendid supper at the Lister and retired early. We were then kept awake for hours by a gaggle of children, inspired by the ‘safari’, loudly telling each other creative tales of the lives and families of the imaginatively-named ducks inhabiting the campsite river. Noisy but quite wonderful.

Strange wildlife at the Malham Safari