…in which an Ouzel sings at length, I choose to ignore the weather and a view is simply incredible.

Zero until Dufton. This day and the next are two of the greatest, wildest days of The Way, although today’s distance isn’t actually that long so it’s worth considering the competent and reasonably ample breakfast at Langdon Beck hostel, which can usually do sandwiches too. In my opinion it’s more or less essential also to support Dufton YHA hostel as it has in the recent past been threatened with closure. Note the exclusive booking bugbear and check availability, it can be busy with groups (in September 2018 I was indeed shut out of this classic Pennine Way hostel by an exclusive booking!!)

The Dufton hostel evening meal is decent but again meagre, whereas the food at The Stag Inn over the green is superb although commensurately dearer. One possible plan is to support the hostel by eating their dinner (very sociable if other Wayfarers are in) then to head over to The Stag for a second pudding and to sample their excellent ales, as well as to use their mildly idiosyncratic WiFi (try switching your phone off and on again). There’s BnB and camping at Dufton as well but the Post Box Pantry tea room was only open in summer (in September 2018 it was open and excellent but due to close for winter at the end of the month.)

Much easier than in 1999 as much of The Way from Cauldron Snout to Maize Beck is now a tarred track, presumably to service the shooting. Confusingly for old hands, The Way no longer passes through Widdy Bank Farm; that should now be away on your right as you walk closer to the river. Take great care along the rocks below Falcon Clints. The so-called ‘scramble’ up Cauldron Snout is a doddle, and I’m scared of heights.

You don’t have to worry either about the former high water alternative over Maizebeck Scar, as mentioned in older guides, because The Way now has its own substantial all-season bridge over Maize Beck.

Looking back along Falcon Clints.

The Way hits Dufton at an obscure dip in the road that’s a little way outside the village. Go right and uphill, then along the road through housing until you see the characterful Dufton Hall (which offers camping) directly in front of you. Here observe and note for tomorrow The Pennine Way onwards to Garrigill heading off to your right. Then follow the road away from it and turn right towards the green, where the hostel is to the left (southwest) and the pub to the right (northeast).

In April 1999 I eccentrically walked this section through deep snow and white-out blizzards, subsisting on frozen Mars Bars bashed on rocks into edible shards. This is high country; do check the weather forecast. If you’re Wayfaring out of season and the weather does turn extreme, carefully consider the ten miles along the road from Langdon Beck directly to Garrigill as a lamer but safer alternative. My blistered companion, concerned about the following day’s longer hike over Cross Fell, sensibly chose that option and then enjoyed a pleasant rest day pottering in picturesque Tynedale.

Upper Teesdale is bleak and its denizens intimidating, there were dead moles strung on fences and a real live bull in the field, as advertised by a sign on the stile.

The pretty meadows of Upper Teesdale.

I gave the entire herd a wide berth. Thankfully they ignored me, despite my red jacket and my head-down posture as I tried but failed to turn every Milkwort into a gentian. Falcon Clints is a classic spot for Ring Ouzels but by two-thirds along all I’d seen was one incongruous Blackcap and numerous Common Sandpipers with their strangely songbird-like calls. Finally, a male Ouzel started to sing just above me, then it moved higher and tracked me all the way to the Snout. I could still hear its loud, insistent cheeroop-cheeroop-cheeroop ringing over the valley behind me from Birkdale.

The rocks below Falcon Clints have to be taken extremely carefully. From fellow-walkers I’ve learnt that many a Way has been scuppered here, commonly by a hard fall onto a knee then an agonising limp into Dufton or Middleton, by when the knee has swollen like a grapefruit and that’s your lot.

The notorious ‘scramble’ up Cauldron Snout is by comparison completely unworrying, and I’m terrified of heights. OK, in four or five places you have to use your hands but it’s not exposed, there are wide ledges below the obvious route upwards. Any primary school climbing frame is scarier in my opinion, especially given the presence of small feral children, so just stow your poles and clamber. It’s hardly a Via Ferrata and it only takes ten minutes. 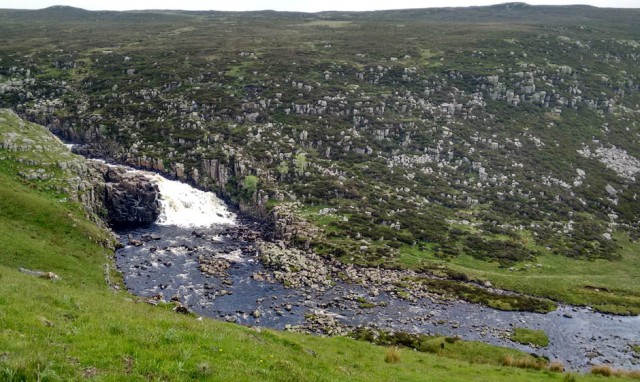 Looking back at the Cauldron Snout ‘scramble’.

All the way from Cow Green it rained and rained and rained, in fact I met several day walkers retreating. ‘Oh, it’s set in’ said one woman just before High Cup, ‘stair rods, I’d definitely turn back’. Two minutes later I walked up out of the teeming clouds into bright warm sunshine and stopped happily for a brew of my patent Pennine Way bog mocha. At High Cup itself the clouds again parted quite suddenly and there was an amazing view.

Something very similar had happened to me there in 1999, when the blizzard was suddenly and miraculously riven by shafts of sunlight streaming into the Vale of Eden. High Cup is a strange and magical spot. Its impact is incredible, not just because of its scale and grandeur but because it’s so unusually isolated, exacting a heck of a hike in either direction from anyone wishing to see it. High Cup has to be one of the top five must-see wild places in England, although of course if we start debating the other four we’ll be here all night.

Dufton is magical too, such a sweet and peaceful place and as this isn’t a long day distancewise I had plenty of a sunny evening to enjoy it. The atmosphere of the village with its pretty red sandstone buildings, so suddenly different from Yorkshire, is healing and restorative. 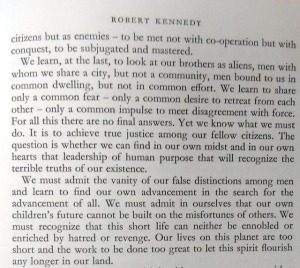 The wood-panelled hostel is a total treasure. Its leather-sofa’d lounge transports you back to the forties; you can almost see and hear ruddy-cheeked youths in canvas shorts and tweed jackets or gingham blouses, passing round a battered gut-strung guitar and a stoneware flagon of ginger beer. Some of the books they read are still there.

The youths themselves are long gone, replaced by a jolly U3A group focused on continuously nattering, and half a dozen variously worn and battered Wayfarers focused on continuously raiding the spud trolley to pad out the slightly sparse dinner. In a small place like Dufton one must distribute one’s favours and one’s plastic; a foray to the more louche and more luxuriously provisioned Stag Inn makes a perfect end to one of The Way’s most legendary days.