…in which I climb inside a rude pike, am dried and plied with food I like and finally find a view at night.

May’s Shop nominally opens at seven, seven days a week though you may have to be patient if she’s involved in family or farm tasks. The White House Inn on the A58 is an excellent pub with great food, my chicken with bacon and black pudding came with a creamy leek sauce and really nice veggies; it looked and tasted like proper, fresh homemade grub.

That’s it for resources en route but I suppose Wayfarers experiencing more complex needs by this point could bus along the A646 into Hebden Bridge or walk the aforementioned loop. The Internet also tells me buses between Ripponden and Littleborough stop at the White House. I couldn’t tell you what you might find in those places as I just shopped at May’s.

Camping at Northern Rotcher is a tad marginal, there’s a few tiny pitches tucked among the rocks but not much you could really call flat. A bivvy bag would give more flexibility here and might also make it easier to find shelter from the south-westerlies to which the whole place is completely exposed, as I discovered. At least there was a view for a change. A concerned local suggested I might find better shelter from the hoolie near the Dinner Stone but having dawdled over my dinner in the White House I didn’t make it that far before dark and also in my experience the whole area around Millstone Edge teems with dog walkers. 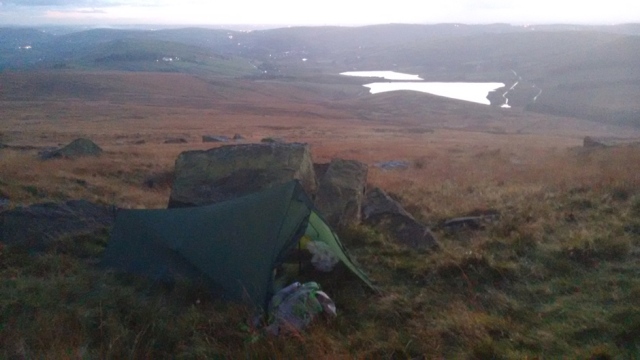 Huddled behind a rock at Northern Rotcher.

Straightforward. At the bottom of Underbank Avenue turn right along and then cross the A646, The Way continues over the pair of bridges a few yards down that road. There’s a short cut uphill through Callis Wood that slices off the hairpin bend; I failed to spot this as the sign at the lower end was missing.

Passing the top end of the shortcut as it comes up through Callis Wood. D’oh!

The path between Stoodley Pike and Warland Drain is vague at times, just follow your compass and the intermittent flagstones and avoid turning off to Mankinholes.

The drive directly opposite the White House is not The Way, you need to go a few steps further downhill to where across the road a fingerpost directs you to the track along Broad Head Drain and up onto the Roman Road.

Having retired early, well fed and refreshed into a still and relatively dry night, I’d slept well and awoke spontaneously at six. As I was packing up the tent it became clear that I wouldn’t have slept in any longer, as some kind of hue and cry involving cattle was developing. I’d cautiously ventured down the slippery slope to the spring with my toothbrush when May’s husband and daughter appeared, waving arms and shouting at some unknown number of beasts that had apparently gone a bit free range in the night. They spotted me and I was recruited as a part-time amateur cowherd. My main role was to stand in strategic gateways with my arms held out to prevent leakage of our reluctant herd onto the road, along which enormous tractors were unhelpfully charging, their spotlights slicing through dawn murk and diesel fumes, blazing and rumbling like agricultural war machines through a son et lumiere of their own pollution. 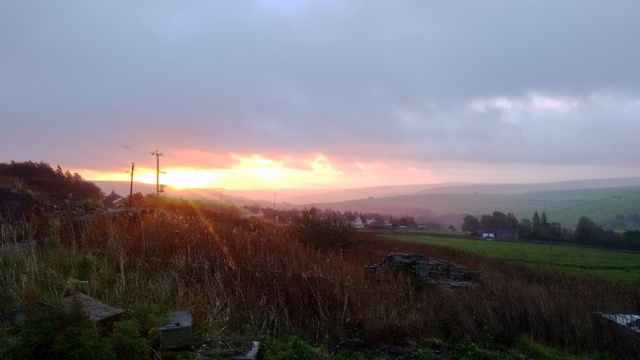 We got the cows into the right field eventually and I walked back for my rucksack. It was a good job I’d packed everything away as in the time it took me to return the cows had somehow skedaddled back down the hill and huddled together onto the tiny flat patch that forms the campsite, which they seemed to consider prime grazing. I retrieved my gear from among them before it got flopped upon and went down to the shop in search of coffee and parkin. I then discovered that May’s seven a.m. opening time is a little flexible, not unreasonably. It was a while before I got going, but the parkin was worth waiting for and several more hunks of it found their way into my pack.

Colden Clough is a pretty and atmospheric place, there really ought to be Sirens singing in the river here as in Oh Brother Where Art Thou, although I grant you any sensible Sirens would be elsewhere on a chilly October morning.

Colden Clough, a nice place for a summer picnic.

I trundled down Underbank, happy to be descending steeply for change through the enviable cottage restorations of the Colden Poets and Calder Artists. It seems to be the law in Calderdale that every household shall own a Subaru; their other car is either a tractor or the fairy chariot of sublime poesy. The Hebden Bridge fuzz having violated this rule by acquiring a Landrover, I noticed in the local paper that locals had wackily sprayed this deviant vehicle with silver paint, presumably tilting it towards the fairy option and at considerable cleaning cost to the taxpayer.

Sensible Sirens might also eschew the grotty old Calder constrained by its sad canal, which I always find strangely moving. I tend to pause and ponder here on how for so long this river literally did the moving in this dale, driving world-class industries. This is a river that’s put in a hard shift and still looks as if it’s waiting for its redundancy settlement. Meanwhile Himalayan Balsam is colonising the Calder’s historic course, alien, luridly coloured and seeding itself everywhere, like biological graffiti.

The Way crosses these two bridges over The Calder. 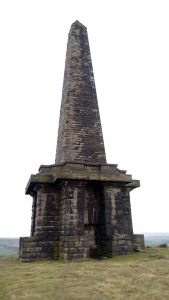 The rude finger of Stoodley.

In contrast, I find Stoodley Pike unaffecting, in fact if anything I feel annoyed by its vulgar ubiquity among this landscape. Part of why I find Callis Wood charming is that I’m aware of its sheltering me from the abusive energy of Stoodley’s rude finger. Not to mention from the King of the Hoolies, whose emissaries were by this point swirling irritably about the treetops.

The thing itself is harshly wrought, so much so that the words Manchester City daubed onto it actually add finesse. Sharp points are out of place in the Pennines. Part of the charm of The Schil is the way it’s been tidily tucked into Scotland, where the pointy things live and where they can stay as far as I’m concerned.

At the pike I met what must surely have been professional dog walkers or kennel proprietors, as they had about nine dogs apiece. Some were loving the wind, some hating it; the net effect was a continuous and complex twirling of multiple leads around their handlers who consequently resembled Goretex maypoles. In June there hadn’t been much point ascending the monument in thick fog, now at least there was a view so I dutifully plodded up the doomy, gloomy stairs. The balustrades are of a Neolithic coarseness and looking up inside the obelisk reminds me horribly of a recurring nightmare I have of being trapped in a dark and narrowing tunnel. Not my favourite place on the Pennine Way, but photogenic, in the way nuclear power stations or car crashes are photogenic. 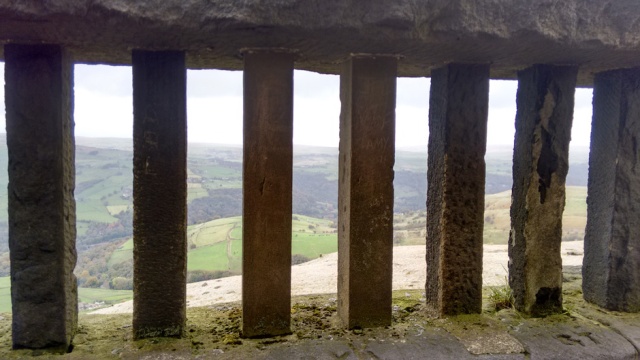 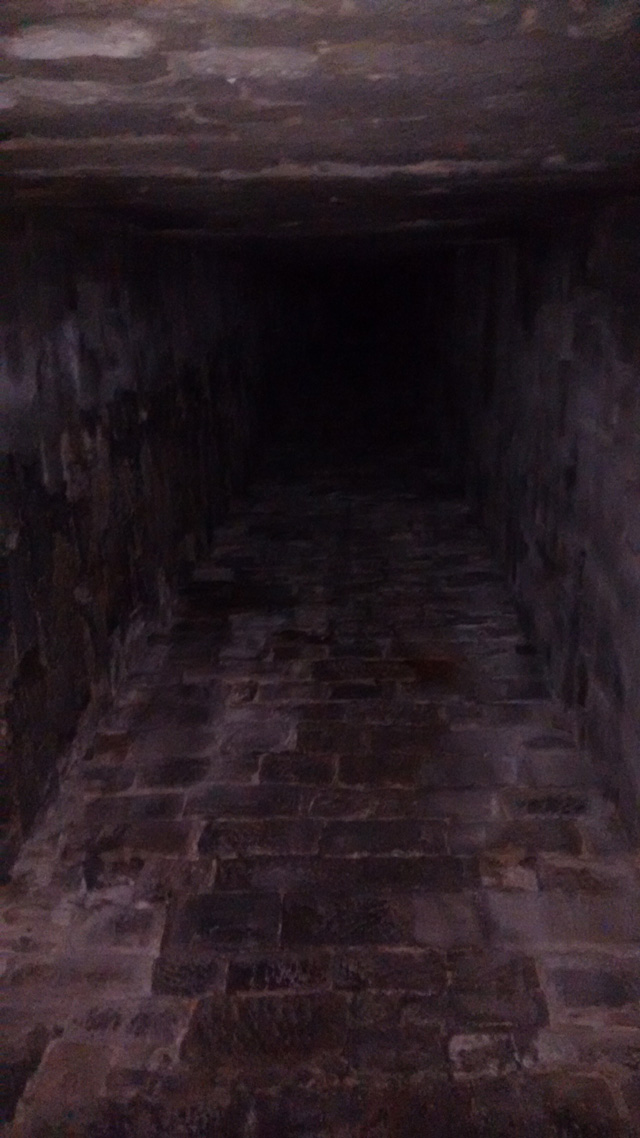 Graffiti artists were very formal in the 1930’s.

Whereas I’m curiously fond of Cyril’s Seat and always like to stop there, wondering who Cyril was and feeling slightly troubled by the idea he may have expired at this very spot – the plaque says he died ‘while still walking the hills’. By this point it had become extremely windy, a south-westerly too, right in my face and by the feel of it incipiently full of sleet. The path is vague in places but the lie of the land obvious and on picking up the Warland Drain I suddenly felt I was on the home straight. Meanwhile the sleet arrived and the gale strengthened. All along the reservoir I was lashed and scoured by horizontal precipitation, borne by a wind so strong it necessitated leaning forward and rowing through it with my poles. This was the coldest I’d been so far and it didn’t augur well for the next two nights. Oddly enough back in June my coldest hours on the entire Way had also been at this very spot.

It was a relief to stand upright again dripping pints of water into the porch of the White House. The kind staff armed me with a delicious pint of Holts and directed me to a quiet corner of the dining room where a large radiator beckoned my sleeping bag. When the manageress saw its enormous bright red expanse thus enhancing the decor (not to mention the atmosphere) of her dining room she gave me an old-fashioned look. ‘Uh-oh’, I thought. ‘Give that here, love’ (‘uh-oh’, I thought) ‘I’ll stick it in the tumble dryer’. ‘Wow!’ I thought, ‘thank you’ I said and I then spent the rest of my really lovely meal worrying whether she’d remembered to switch that miraculous machine to synthetic. My bag was returned to me dry, warm and unmelted and my offer of a tip was waved away – what nice people.

Blackstone Edge is one of my favourite places on The Way and, true to form, by the time I got here the sun was out. I spent a pleasant forty minutes airing my tent, rock hopping and eating the parkin I’d smuggled duty-free from Yorkshire to Lancashire. 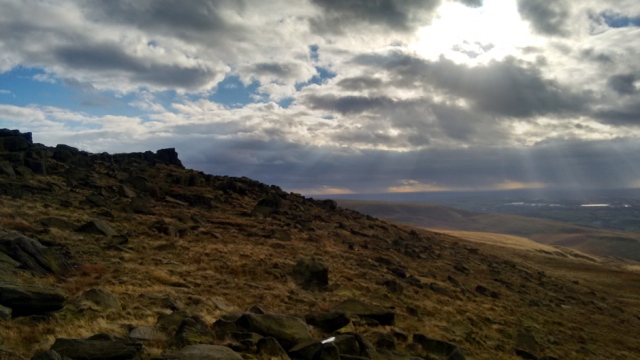 By White Hill I was starting to wonder about a campsite, but on realising this was tragic Saddleworth Moor I decided to press on. I didn’t fancy sleeping out on Saddleworth in case I heard children’s voices or the ring of spades on gritstone in the night. 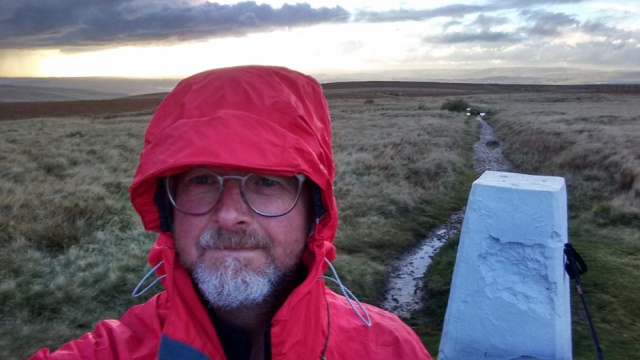 South of the A672 the rain started again and I met a girl so thoroughly Goretexed all I could see was her eyes and her eyebrows, the latter curiously flat, angular and black like strips of Velcro. It occurred to me Velcro eyebrows might have saved my hat from the King of the Hoolies back on Penyghent – I was badly missing proper headgear on this rapidly cooling evening. I didn’t get as far as her helpfully suggested campsite; as night fell I tucked the Stealth unevenly and saggily behind a rock that gave some rudimentary shelter. Northern Rotcher is not far from urbanisation, and near the M62 of course, so it’s surprisingly noisy. As the tent flapped wildly in the gale all night too, this wasn’t my best sleep. It was however one of my most panoramic and atmospheric – in more ways than one – campsites.