I’ve written elsewhere about my variable experience of bivvybagging; how I always seem to end up lying in water one way or another. How, as Ronald Turnbull says in The Book of the Bivvy, I’m either dry but cold or warm but wet.

The worst problems arise when it rains and you have to put your head inside the bag, not least because it’s impossible to sleep with water pelting onto your eyeballs. The bag promptly fills with condensation and it cannot breathe because, in the rain, there’s no moisture differential across its membrane.

The joy of bivvying

Hiking guru Colin Ibbotson tweeted that he’d made himself a nifty little tarp that covers his head, with hardly any bulk or weight. Further research turned up YouTube videos of so-called Micro-Tarps and eventually the fact that you can buy one, from BackpackingLight.

“My partner has a sewing machine”, I thought, “this looks like a pretty straightforward way to learn to use it”. I resolved to take my first unambitious step into the murky and quite laborious world of MYOG – Making Your Own Gear.

Good morning world. I seem to be lying in a puddle, with a carrier bag for a pillow. If only I had a micro-tarp…

Spoiler – in my opinion the asking price of £44.99 is more than reasonable for the labour involved in making one. If, like me, you’re inexperienced verging on incompetent in needlecraft, it’s an absolute bargain. Not realising this, I perversely persevered.

Silnylon seems to be made in a 1.5 metre width so this would require a piece 2.5 metres long. This is a bit wasteful as it’s sold by the complete metre. Applying just a little thought, and a pair of scissors, it seemed I could cut that shape from a shorter piece of fabric…

Thank goodness for old-school paper and scissors. Here are the final dimensions for maximum economy using a piece of ripstop silnylon 1.5 metres wide and 2 metres long.

I got mine from Pennine Outdoor, it cost about £18 with the postage and a nice big reel of green thread.

On balance I think a slightly bigger tarp, as per the original design, might have given me better protection in really rough weather. And that extra half-metre of silnylon could probably have been used to make other useful things. Ah well.

Having recklessly and irreparably cut the fabric, it only then remains to hem it all round, with nice strong double hems. You need LOTS of pins. At this point I received a stern lecture on the age and fragility of the sewing machine, also speed awareness training. 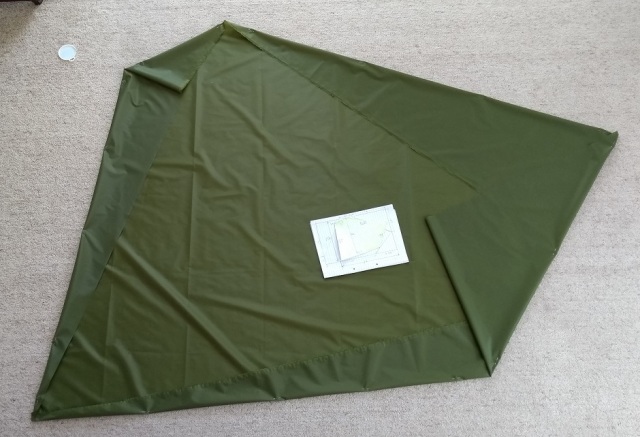 Initial pinning of the silnylon, just to see the shape. You then need to trim it leaving enough margin for hems, I folded mine double. Poke in lots of pins. They should point inwards and perpendicular to the edges, not parallel to the edges like these do. I was taught that after I took the photo.

I’m really quite rubbish at sewing!

Now, in a mad delusion of grandeur, I blatantly copied the commercial design by adding a lifter loop that’s supposed to give you a bit more headroom. You’ll need to seal the stitching with Silnet, so it’s quite a bit of extra work for a small enhancement. Especially if, like me, you make a right pig’s ear of it and in fact while trying to bodge it on actually nick a hole in your tarp with your scissors, necessitating the sewing on and sealing of another patch!!

On balance I think this is a worthwhile enhancement, it did give me more space to hide from the rain and seemed to render the whole caboodle more stable. 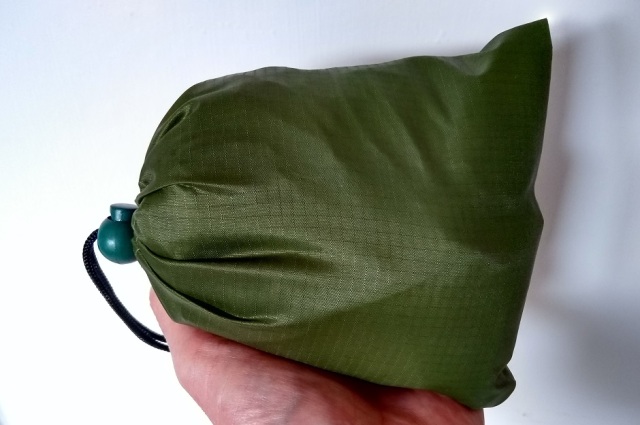 Use another silnylon trimming to run up a little stuff sack, I would, just because you can and before the owner of the sewing machine comes home. With a couple of random bits of cord for guys (but no pegs) the whole thing weighs 175 g. Don’t commit to fixed guy lengths, flexibility is good.

That’s about it. Now for the great moment when you rig it up in the garden, and even the cat laughs.

It does take a bit of practice. You don’t need your front pole set so high, for a start. It looks alarmingly skimpy if you’re used to a tent. Appearances are in this case are not deceptive. 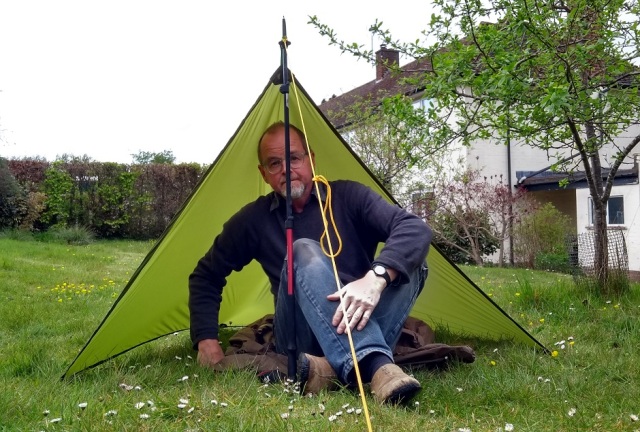 Around this point you start to realise that from your first ever effort at Making Your Own Gear you have learnt a few lessons. One is that it probably takes a lot of experiment and evolution to arrive at a silnylon shape that pegs out without creasing. Respect to professional tent makers – did I mention you can buy one of these for £44.99? Another is that silnylon hems ruck up when they’re stretched if they aren’t more or less orthogonal to the weave. 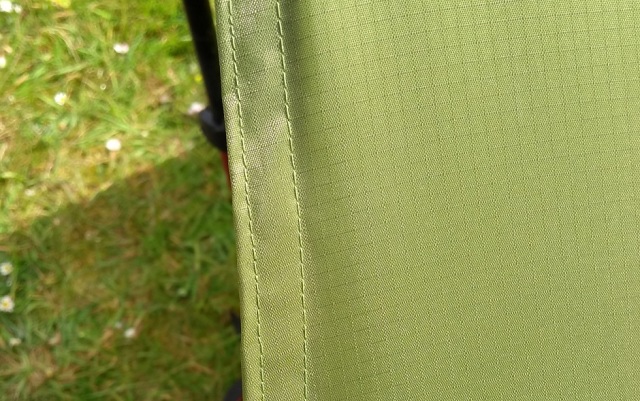 You want the main hems that you’re going to be staring at for entertainment while lying under the thing in pouring rain to be in line with the weave, as near as possible, so they stay flat under tension.

Where you’ve cut and hemmed your silnylon on the bias (wow – technical term!) the hems will ruck up under tension. The way to overcome this is to use a posh zigzag stitch, as seen in the hems of t-shirts. Sadly my GF’s sewing machine is nearly as old and tired as her partner and its zigzagerrator is banjaxed.

So – what’s it like in use? Well it very much depends of course on your bivy bag. Mine is rubbish. Even with my head protected but outside the bag, which I admit was transformational, I still woke up in a puddle after nights of heavy rain, if I got any sleep at all for the general horror of the experience. On several mornings during the hike for which I made this tarp I had to wring out my sleeping bag, but that wasn’t the fault of the tarp, I’d have been far worse off without it. I think I need a better bag!

In sand dunes – an excellent night. It’s very hard to pitch a tent here but a bivy doesn’t need flat ground and the tarp needs less tension so it can just be tied to clumps of marram grass. Also a tent is quite visible and I’m not really supposed to be sleeping here – that mat is annoyingly conspicuous. No actual rain but a heavy dew that would have been tiresome without the tarp. This is when a bivy-tarp combo excels – on a dewy summer night in a dodgy location.

On just showery, breezy nights my tarp was brilliant. It keeps the wind off, as long as the wind doesn’t change. You don’t have to worry about packing up and covering your gear, you can just strew it randomly around your head. Add a bit of Tyvek groundsheet and it’s positively luxurious. You can check your email and social, eat a pie or three or even make a brew in relative comfort, quite well protected from all but heavy windblown rain.

In another sand dune – nice and discreet. 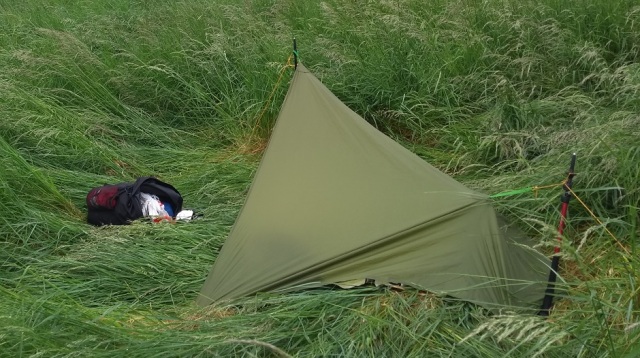 On a sea wall, on a slope and among tall, thick vegetation; I could never have pitched a tent here. It rained, so I spent most of the night in a foetal position with my legs jammed against my trekking pole.

From a micro-tarp you do get to see some pretty funky sunsets. Here I’m in a Lincolnshire roadside swamp, infested with slugs, hidden behind a pile of flytipping. Again it would have been impossible to pitch a tent here, and there was no official camping for miles around.

By the Grantham Canal, a terrible night, I misjudged the wind direction, heavy rain blew under the tarp all night and soaked me.

A much better night in a pub garden, with permission and after an excellent dinner.

As you can see, my micro-tarp experience has been mixed. However there’s one more top tarp tip – you can pitch it in different configurations. In particular the triangular-ish shape is perfect for adding a roof to a summit wind shelter.

Here I am (below) on the summit of Carnedd Llewelyn (1064 m). The micro-tarp kept the hail off brilliantly – this hail was falling in the middle of June, by the way, I wouldn’t just stroll up there for a random kip if I were you. In fact I had such a great night that my tarp is now officially known as the Carnedd Llewelyn Sheraton and just for that one experience it was well worth the small cost and moderate trouble of making.

Keeping the hail off nicely. It was pretty breezy up there too.

I just wish I had a better bivy bag. Mine is a Snugpak ‘Special Forces’, I haven’t got on with it at all. Any recommendations would be gratefully received, thanks.